Three times it was announced - twice it had to be rescheduled due to the pandemic. But finally, on the first July weekend of 2022, the World Model Expo (WME) opened its doors.

The event has been described as something like a "World Championship" of the modeling world that brings together hundreds of painters and modelers and thousands of visitors - and a total of over 4,800 models, figures, dioramas and vignettes in a competition to be judged by the best modelers and miniature artists out there.

With so much hobby madness going on, it is needless to say that the MASSIVE VOODOO crew had to be there - and a good showing it was. Roman was part of the judging team, Andy, David, Hansrainer, and Sebastian took part in the competition, and Johannes and Philip were there and provided moral support! Sadly, Daniele, Josua and Kilian could not make it. With this little article we want to share with them - and all others who could not be there - a few of our thoughts about this magnificient weekend.

But before we start right into it, we are happy to announce that MASSIVE VOODOO also handed out our own little prize: the MASSIVE VOODOO Most Creative Award. Let us say that it wasn't easy to settle on just a single display or figure from all that incredible miniature goodness, but ultimately, we were rather quick in agreeing on the winner - Luis Méndez Juanola for his amazing interpretation of a well-known Lucas Pina masterwork: 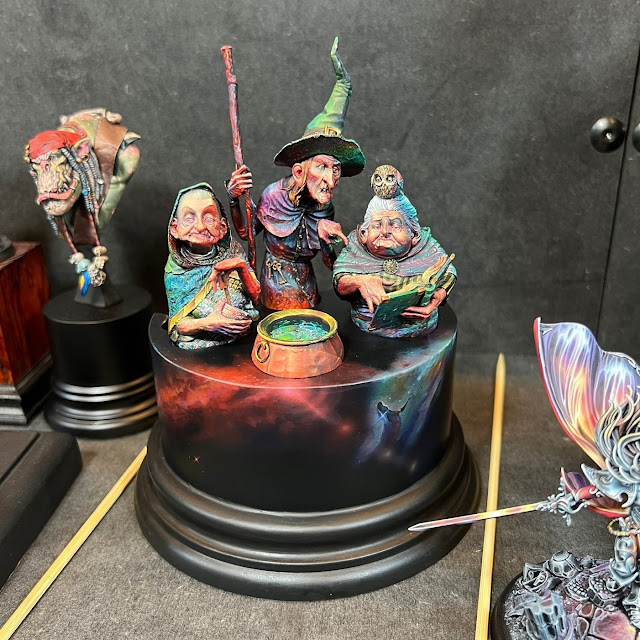 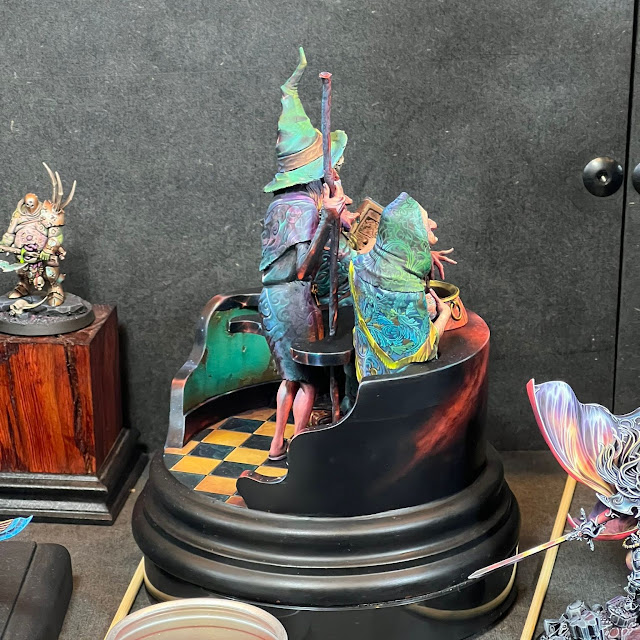 We were super-impressed by the incredibly creative idea, the fantastic execution and beautiful painting style, and particularly the love and eye for so many small, funny and well-thought-out details! In fact, this was not the first time, Luis received the MV Most Creative Award: in Monte San Savino 2015, the team was also super-impressed by one of his works! Well done, Luis! Hansrainer: To be strict and open: We picked the piece by going through the whole exhibition, all categories - Master and Standard alike with a focus on creativity and not on execution. We settled on the pieces without knowing by whom it was - in fact it took some support by the WME organisation to identify the winner. 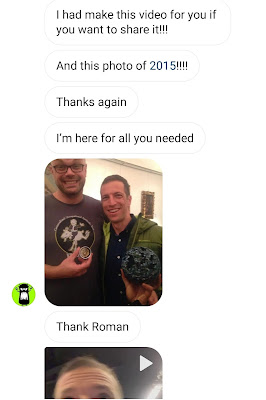 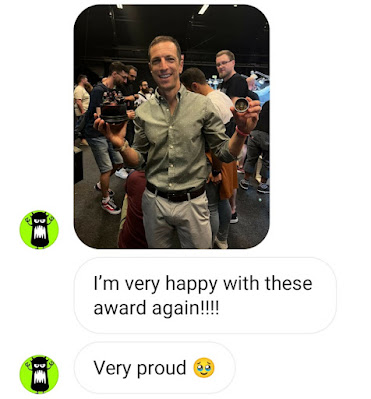 But now, and almost without further ado, let's give you a few impressions of what the WME was. Of course, this report does not contain just words, but we also have some pics for you to give you a few impressions of what WME was like. While there is no way we could do justice to all of the exhibition pieces, these pics are surely some of the best you'll find out there since Roman was able to take them during his duty as a competition judge, when the normally jam-packed halls were empty.

WOW - what else could I say. WME was a blast. I’ve never been to Eindhoven, the SMC or even a WME before. First of all I was impressed by the size of the hotel - in my opinion they need a shuttle service to the rooms :) The same shocking moment came to me when I saw the size of the fair itself. I have been to smaller ones only and the size of the WME was crazy. Three halls of vending area and a big area for the competition. Awesome! … was not what my wallet said at the end - but hey, it’s been a while since I had been shopping at a fair and I’m very happy with my loot :D

The competition was on another level - to see so many entries on such a high level in standard and master was marvelous. I entered in fantasy master painting and open and an old piece in Green, which was a special category sponsored by the SMC team. In all three categories I received a highly commended pin which I’m super happy about. As said before, the level was extremely high and I went there without any expectations at all so getting the pins was perfect!

The best part of the show was not shopping or competition, it was meeting the people I haven’t met for a long time and of course meeting new ones - sharing beers and nice chats was a pleasure.

Big thanks to the WME Team for organizing everything - overall a perfect event.

Oh well, where to start? Its been so long that its barely true anymore - the last shows must of us went to where in the auspicious year 2019: The Duke of Bavaria had its great and sad final year, SMC 2019 was great fun but overshadowed a bit by the excitement of the upcoming WME in 2020. Something which we all know now wasn't going to happen. I will not lie - the pandemic and the lack of events and contacts to friends and artist from all around the world really had a big impact on me. I am not a huge fan of enjoying the hobby for and through photography or video - the medium is three dimensional and seeing the pieces live, talking with the artists face to face - admiring, exchanging, growing is the central part of my enjoyment.

So when we could finally be there for the first time in three years - and then in this size - it was just overwhelming. There were so many works of art that it was barely possible to take in a fraction - not to mention the whole show. And since WME is only so often (every 3 years in good times) - there were some legendary pieces mixed in as much new work. And the pieces weren't just baffling from a technical point of view: There were true gems in the standard category as well - rough around the edges or straight unpolished from a technical point of view, but creative and touching. I still miss an unjudged exhibition area, where people can just show their work without the stress and insecurity that comes with being part of a competition - I circumvent that by putting my work in Masters - that buries any chance for a medal and puts all ambition to rest.

Unfortunately the pandemic had killed my passion and so the most recent piece I brought was from a painting class in last fall - everything else more or less was from long ago. Fortunaley, seeing old acquaintes and friends again, making connections, meeting new ones and finding inspiration rekindled a fire and passion I believed mostly gone for the sake of efficient army painting. I received a jolt in painting energy that will hopefully carry far - at least it made certain I want to visit all the shows now: Kulmbach, Monte, Contrast, Moson etc. culminating in SMC and Monte 2023.

I hope we can all be careful and avoid having to go through such a draught again. Also thank you to the whole WME Team, Robert and Margot Crombeeke and the Massive Voodoo Team to make this weekend such a memorable event.

Hope to see you all - and many more at the next shows to come!

If I had to summarize the WME weekend in a single word, I'd say it was "overwhelming". There just were SO many impressions. First of all, of course, the sheer quantity of beautiful pieces displayed in the competition area and in the judges cabinets. And the quality of the modeling and paint jobs was just out of this world. Add to that the droves of visitors flocking around the displays and in the vendor area - I often felt just so overwhelmed that I had to cut my strolls through the display area into little chunks of an hour or so to be able to actually take it in.

But, that gave me time to do what I love best when visiting such shows: just chilling out with cool people. In fact, more than all that hobby awesomeness, it was the people that made the WME truly amazing. It was great just hanging out, meeting friends I hadn't seen for two or more years, and of course making new ones. One of my personal favorites was the super-nice BBQ on Friday evening, which we spent hanging out, talking, and listening to some nice live music. Thanks to everyone who made the WME weekend so special and enjoyable!

So, when Sunday came and it was time to head home, I went back from the WME loaded with inspiration and motivation for future projects - and happily without Covid... I can't wait to return to Veldhoven in October of 2023 for the Scale Model Challenge (SMC)! Hope to see you there!

Take care and talk to you soon! Best, 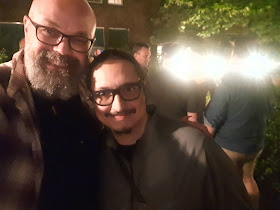 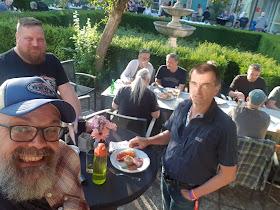 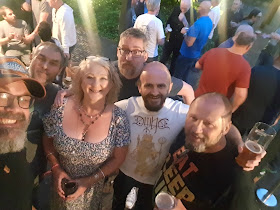