or shall we say: "Braaiiinnss!!".
It's about time for the results of the latest tutorial voting.

MV's year of the painter 2 is proud to present to you the next article in line.
Many thanks to everyone who voted since last Tuesday. It was a very close run between the lady and the Zombies. Thanks to all 44 of you who voted.

Roman will now take care of the article. We hope you enjoy!

You want to support us?
If you like to support the monkeys of Massive Voodoo in what they do, please feel invited to drop a jungle donation in their direction via paypal or check their miniatures they got on sale.

Updates on this so far:

how to start with this one?

INTRODUCTION
You all might know my love of mass dioramas and maybe the love I find for painting up Zombies.
There is this one idea I had for a long time now and I see that it is mucho work. I was making plans and collecting ideas for about a year before I really wanted to start. These ideas were mainly happening in my brain, no drawing or else happened.

With this article I want to show you all how such a project grows from the early start and most important this will also be our first community project, so prepare as ...

INITIAL IDEA
The idea came to my mind when I was having a cigarette on my balcony back in those days in my old flat. It was night, dark and I could see a truck from a bakery standing under a street light. Perfect zenithal light there. I imagined a gang of survivors on top of it and a huge mass of Zombies around it.
Simple as that.

SECOND THOUGHT
It is good to not completly start ideas in form of a project so I waited and while playing GTA V - a computer game - I had the idea to make this happen on a leisure park on a pier, just like the one in Santa Monica, California.

THIRD THOUGHT /  FINAL CONCEPT
Well, ideas grow and over some months, talks with friends and brainsssssstorming the picture of the scene turned to a bigger bridge with a dramatic showdown on top. A highway bridge/road with masses of Zombies under it. So many that you can hear them while you just look at it. Still with a truck and many more cars and a wonderful, tragic story being told on top. I will not tell it here. Let's keep that as a surprise for now.

I did not start yet.
As I knew the project needs upfront plans, project stages and material and all planned for a smooth and exhausting workflow. I checked for some cars in the right scale, checked for some Zombies here and there and slowly the stuff gathered to be used.

BENE JUMPS THE TRAIN
While I sat down with my buddy Bene from the MV-Team in our studio and we talked about miniature painting we realized that it is very sad that there is no bigger project from Bene so far, like a diorama or else. He had some ideas, but never finished or even started these. Sad.

I asked him if he would be interested to be part of this project.
To make this project our project, not completly mine. He agreed and I was happy to see his glowing eyes, but on the other hand I told him that I already got a pretty nice concept for it all. I also told him that I am open for his fresh input, feedback and ideas to the project and we both talked on our ideas on this one cool painting night.


PROTOTYPING
We made our first real prototype on a beautiful plinth from Sockelmacher.de with just stuff to see what we were talking about: 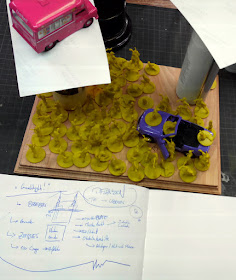 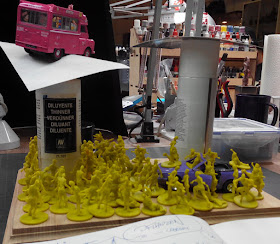 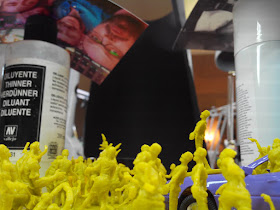 We decided to work in Scale 28 mm.

Allright, as we opened up all my Zombicide Zombies for this test we quickly saw that we are in need of many more. Especially as we decided to use them without their attached bases to pack them to a horrible mass no one will understand.

We decided to make it the biggest Zombie Diorama that has ever been, without a helicopter :)

TIME FRAME AND PROJECT STAGES
With such a big project you definatly need a plan. First we said the time frame would be two years.
Of course we would not work on it for two years. We also have other stuff to do, but we decided to set this time frame as a basic thought.

We made our thoughts on project stages. Useful ones. We are now in stage #01 and the project's working title is "Gnnarrgglll!" or something like it.

STAGE#01
Painting as much Zombies as possible. Many, in a good quality, but not too high as we need masses.

STAGE#02
As soon as we got a good amount of painted Zombies we will start working on the lower area of the base and the bridge. Build, paint and then we can already add the first painted Zombies to see how many more we need. This is good for motivation.

STAGE#04
As soon as the ground is packed and painted we will start working on the upper area of the highway. Prepare the road, looted cars and the dramatic moment that is happening on top.

STAGE#05
We guess more Zombies again and finalizing the epic scene on top which will still be a surprise for you. Final paintwork, final sculpting and conversion work and finalizing everything.

STAGE#06
Of course there will be a stage 6, but we do not know it yet.

COMMUNITY PROJECT INFO
Allright, as we are in STAGE#01 now we need your help.

Roman and Bene are already painting Zombies like crazy, but they rise slowly.
Both of them agreed on doing small conversions here and there, for example, cutting off a head or arm here and adding it to another body to make the Zombies unique. Heavier conversion are in progress.

As mentioned we use the Zombies from Zombicide so far. We cut off their plastic bases and put them together on some black plastic plinths we use to collect the first batches. 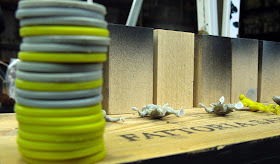 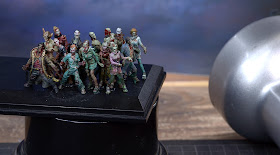 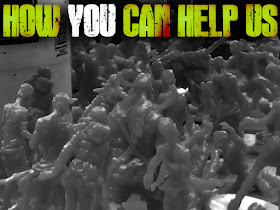 - Paint up a Zombie in 28 mm and sent it to us!
Your Zombie will be added to the project and your paintwork will be a part of this superepic diorama.
You can use all brands as long as they are in 28 mm. If you like you can do conversions to make your Zombie stand out and make him unique. Of course you can support us with more than one painted Zombie!

- Donate Zombie Miniatures for the cause!
We are in desperate need of hundreds of numbers of Zombies. Check your bitzboxes and if there are some Zombie Miniatures you do not need donate them to the biggest Zombie Diorama ever build.

If you like to do so please contact: Bene(at)massivevoodoo.com
for further details on the shipping. Also if you got any questions.
He will get back to you as soon as possible.

- Share it with your painting friends
and have a cool Zombie Painting night for this cause together.

- Where to get Zombie Miniatures in 28 mm?
Terrormizu suggested via comment we should do a link collection of where to get 28mm Zombiemodels. Well, so far we use the ones from Zombicide, which is easy to find by just typing it to google. Please feel free to add links via comments:


WHAT DO YOU GET OUT OF IT?
Your support will help to make this Diorama come true. Your painted Zombie will be a part of the diorama that will write history. We will write updates on the project stages as soon as they happen. If you support us in this you will be listed in the supporters list, like Jannick, who got a Zombie on one of Roman's recent painting classes and sent it back in an instant: 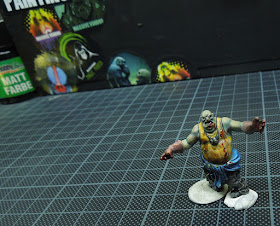 We have one plinth for Roman's painted Zombies, one for Bene's Zombies and one for the Community project Zombies. This looks like this and we will keep you updated about the progress regularly: 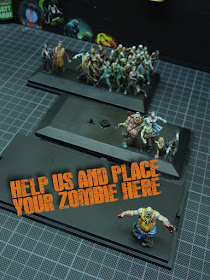 SIDENOTE:
In the end, when we will put all Zombies together to the base we allow ourselves to use the airbrush or washes here and there to bring them all together. We are not aiming to change your paintjob here, we are just aiming for having a proper mass that looks like a crazy mass, fitting from the athmosphere and such.

We all love to paint Zombies, are you with us?

Thanks for the support to: